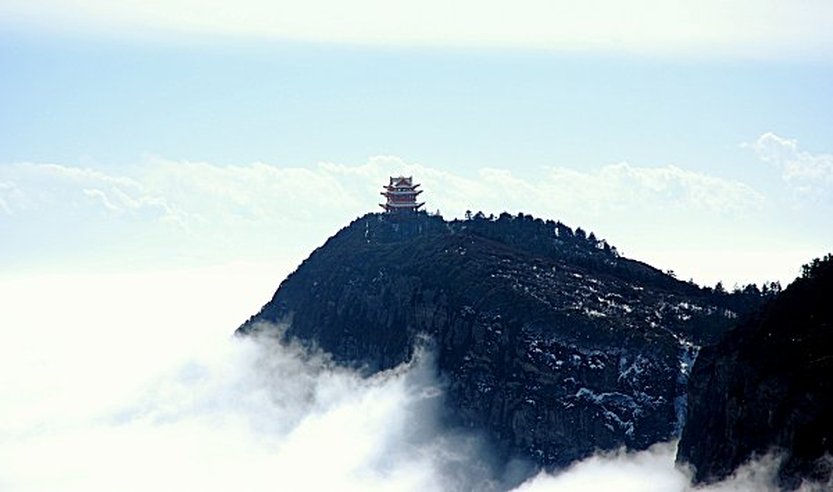 EmeiShanTop - Wikipedia
Mountains are special. Anyone who has ever lived near, or on a mountain knows it. There’s an energy there that can be seen and felt. But in China some mountains are more special than others, especially for martial arts. Mountains have Qi (Chi) energy, spirits and a difficult to define energy.*  Talking with a student recently I was told stories about some of the mountains famous for martial arts.  I’ve heard of Wudang Mountain, made famous by Zhang Sanfung. But these others I had to check out, and here’s what I found:
The Sacred Mountains of China are divided into two groups,
one associated with Taoism and the other with Buddhism.
The group associated with Taoism is known as the Five Great Mountains
(simplified Chinese: 五岳:Wǔyuè), whereas the group associated
with Buddhism is referred to as the Four Sacred Mountains of Buddhism
(Chinese: 四大佛教名山; pinyin: SìdàFójiàoMíngshān).
http://en.wikipedia.org/wiki/Sacred_Mountains_of_China

Below are the mountains I heard about being famous for martial arts: 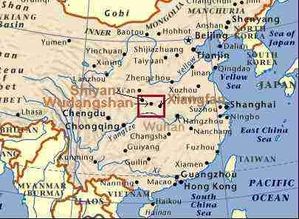 In years past, the mountains of Wudang were known for the many Taoist monasteries to be found there, monasteries which became known as an academiccentre for  the research, teaching and practice of meditation, Chinese martial arts, traditional Chinese medicine, Taoist agriculture practices and related arts. As early as the Eastern Han Dynasty(25–220 AD), the mountain attracted the Emperor's attention. During the Tang Dynasty (618–907), the first site of worship—the Five Dragon Temple—was constructed.

According to legend, Zhang Sanfeng  (张三丰), is the originator of Wudangquan generally and Taijiquan specifically.

He was said to be inspired by a fight he witnessed between a pied  magpie (also said to be a white crane) and a viper.

From the early 20th century, Taijiquan,  Xingyiquan and  Baguazhang have been considered Wudang styles, following Sun Lutang.  Following this classification the national martial arts tournament of the Central Guoshu Institute held in 1928 separated the participants into "Shaolin" and "Wudang".

The third biannual Traditional Wushu Festival was held in Wudang Mountains from October 28 to November 2, 2008

Wudang Tai Chi is not simply what most people think. It is the queen of internal martial arts that unifies a number of opposites like outside, inside, dynamic, static, and internal/external to make a complete system. It’s also marvelous for health and healing.

The Wudang Tai Chi Chuan system is now  being taught in Europeby two of Cheng Tinhung’s disciples, Dan Docherty and Ian Cameron, both based in the United Kingdom. The system also continues to be taught in Hong Kong, and the current head of that school is Cheng Tinhung’s son Cheng Kamyan (Zheng Jianen) 鄭鑒恩, whose school is called the Hong Kong Tai Chi Association 香港太極總會. 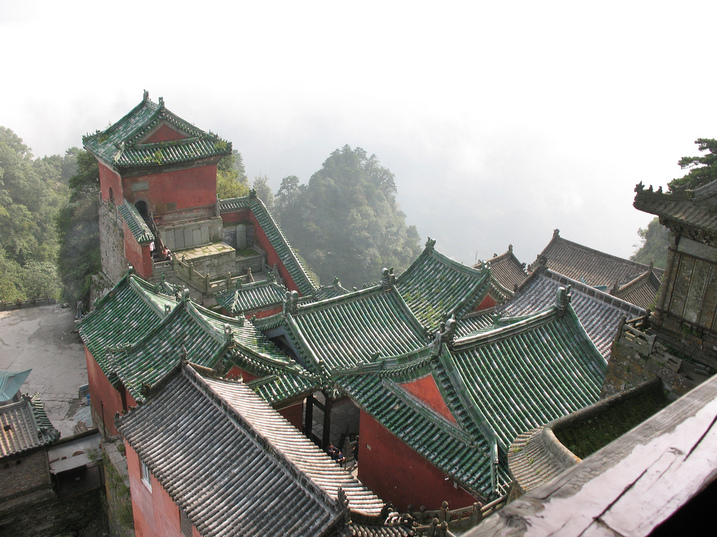 Wudangshan_Taoist monastery at the top of Wudang Mountains. Wikipedia 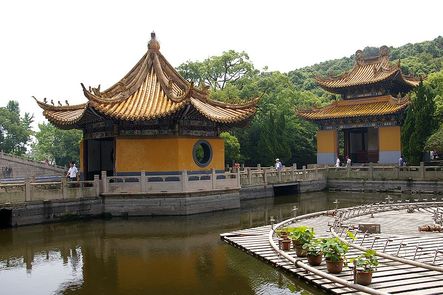 Putuoshan Wikipedia
Pǔtúo Shān(普陀山) is on an island southeast of Shanghai, in Zhoushan prefecture of Zhejiang province, China. It is famous in Chinese Buddhism, and sacred for the Goddess Guan Yin. Around 1612, the 20-year-old future Chan-master (Chinese boxing master) Yinyuan Longqi arrived at Mount Putuo while looking for his father, who had disappeared fifteen years earlier. He served tea to the monks.The religious activities can be derived from qin dynasty. During the tang dynasty, along with the development of sea silk road, Putuo Mountain became the center of Han Buddhism for Guanyin.
Source:http://en.wikipedia.org/wiki/Mount_Putuo 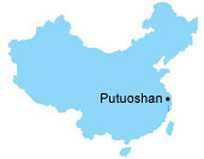 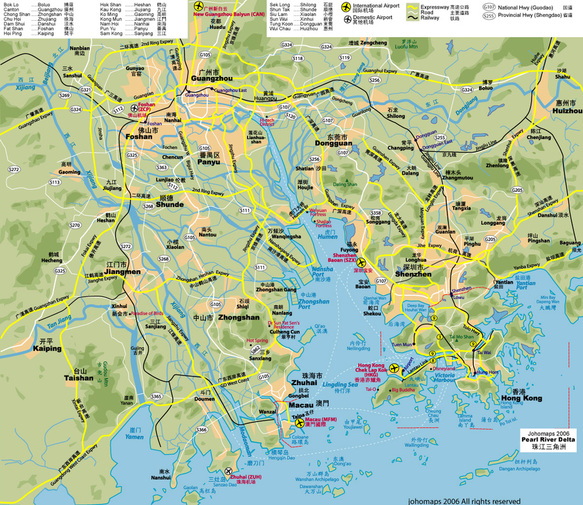 The town of Foshan is many centuries old, and was famous for its porcelain industry. Now, the third largest city in Guangdong, it has become relatively affluent compared to other Chinese cities, and is home to many large private enterprises. Foshan has recently seen a transformation brought by China's  booming economy. Foshan is also famous for its martial arts. It contains numerous Wing Chunschools where many come to train and spar. 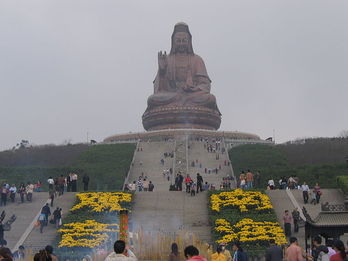 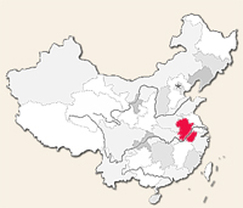 Jǐuhuá Shān; literally "Nine Glorious Mountains" is one of the four sacred mountains of Chinese Buddhism. It is located in Qingyang County in Anhui province and is famous for its rich landscape and ancient temples.

Many of the mountain's shrines and temples are dedicated to Ksitigarbha (known in Chinese as Dìzàng, Chinese: 地藏, in Japanese as Jizō), who is a bodhisattva and protector of beings in hell realms according to Mahayana Buddhist tradition. Pious Buddhists often visit Anhui to climb to Greater Tiantai peak, which is regarded as Jiuhuashan's most important peak, although it is not the tallest.
http://www.jiuhuashan.com.cn/english/

Also, I found this: BAGUAZHANG, or eight diagram palm shadow boxing, is one of the major styles of traditional Chinese martial arts. It features a great variety of unpredictable blows with the palm and deft circular movements of the feet. These well-knit intricate hand and foot movements follow the directions - north, south, east, west, northeast, southeast, northwest and southwest - indicated in the Eight Diagrams as described in the Chinese classic Book of Change. Hence the name eight-diagram shadow boxing.

This style of Chinese boxing was very popular during the time of the Qing Dynasty's Emperor Dao Guang who reigned from 1820 to 1850. The story goes that Dong Haichuan of Wen'an County in Hebei Province was the man who created this style of boxing. Dong was fond of kung fu since he was a child. He was poverty-stricken but chivalrous, and he drifted from place to place to eke out a living. When he came to Jiuhua Mountain in the south of Anhui Province, he met the Taoist priest Bi Chengxia who taught him the secrets of the Taoist school of wushu…    http://www.smilingtiger.net/origin.htm 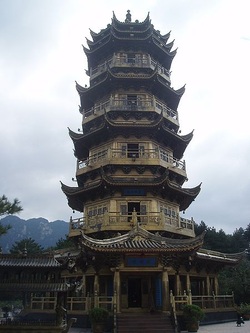 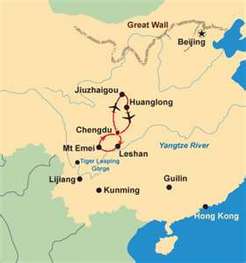 Mount Emei 峨嵋山 Éméi Shān is a mountain in Sichuan province, China. Mount Emei is often written as 峨眉山 and occasionally 峩嵋山 or 峩眉山 but all three are translated as Mount Emei or Mount Emeishan: 峨嵋 means "lofty brow." At 3,099 metres (10,167 ft), Mt. Emei is the  highest of the Four Sacred Buddhist Mountains of China.

16th and 17th century sources allude to the practice of martial arts  in the monasteries of Mount Emei made the earliest extant reference to the Shaolin Monastery as Chinese boxing's place of origin. (Wikipedia)

According to Boxing Records of Emei Martial Arts, the founder was a Taoist priestess, who later entered Buddhism. She was quite good at practicing and studying of boxing of various schools. And she created a new boxing from Kungfu of various schools. She spent 13 years achieving this. Since in ancient China, women were also called "Emei", so the set of boxing movement was also named "Emei Boxing". After that, her disciples settled in Mt. Emei, and called it "Emei Boxing" as partial tone of Mt. Emei.