WUSHU CITIES IN CHINA
China has three cities that are most famous for martial arts: Cangzhou in Hebei Province, Dengfeng and southeast China's Putian. 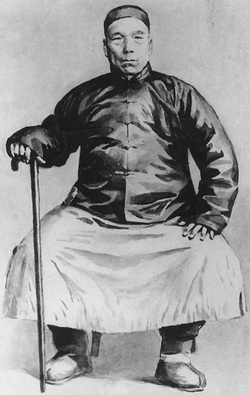 Wu Huiqing (1869-1958)
Cangzhou City is in the South-east of Hebei Province and is called the martial arts and acrobatics village – one of the birthplaces of Chinese martial arts. It has a population of about half a million and is only 90 km from Tienjin, a major port city 180 km south of Beijing.

Cangzhou is the famous hometown of martial  arts. Enjoying equal fame with central China's Dengfeng and southeast China's  Putian, Cangzhou is one of the three traditional martial arts centers. With a long history, Cangzhou has various martial arts sects. A person born in  Cangzhou is probably going to be asked whether he is good at martial arts during his first meeting with others.

In the late Qing Dynasty, many martial arts masters emerged. The most famous master is Wang Wu, who was called Big Blade. Another master Huo Yuanjia (1868-1910 A.D.), whose original family home was in Cangzhou, was regarded as a national hero for his continuous victories over foreign challengers.

Bājíquán (Chinese: 八極拳; pinyin: Bājíquán;Japanese: 八極拳, Hakkyokuken) is a Chinese martial art that features explosive, short-range power and is famous for its elbow strikes.  It originated in Hebei Province in Northern China, but is also well-known in other places today, especially Taiwan. Its full name is kai men baji quan (開門八極拳), which means "open-gate eight-extremities fist".

Baji quan was originally called bazi quan (巴子拳 or 鈀子拳) or "rake fist" because the fist, held loosely and slightly open, are used to strike downwards in a rake-like fashion. The name was considered to be rather crude in its native tongue, so it was changed to baji quan. The term baji comes from the Daoist classic, the Yijing(I-Ching), and signifies an "extension of all directions". In this case, it means "including everything" or "the universe."

The first recorded baji quan teacher was Wu Zhong 吳鍾 (1712–1802). Famous teachers that promoted the style included Wu Xiufeng 吳秀峰 and Li Shuwen 李書文 (1864–1934). The latter was from Cangzhou, Hebei, and earned himself the nickname "God of Spear Li". A Peking opera Wu Shen (martial male character) by training, he was also an expert fighter. His most famous quote is, "I do not know what it's like to hit a man twice." Li Shuwen's students included Huo Dian Ge 霍殿閣 (bodyguard to Pu Yi, the last Emperor of China), Li Chenwu (bodyguard to Mao Zedong), and Liu Yun Qiao 劉雲樵 (secret agent for the nationalist Kuomintangand instructor of the bodyguards of Chiang Kai Shek). Baji quan has since acquired a reputation as the "bodyguard style".

Baji quan shares roots with another Hebei martial art, Piguazhang. It is said that Wu Zhong, the oldest traceable master in the baji lineage, taught both arts together as an integrated fighting system. They eventually split apart, only to be recombined by Li Shuwen in the late 18th to early 19th century. As a testament to the complementary nature of these two styles, there is a proverb that goes: "When pigua is added to baji, gods and demons will all be terrified. When baji is added to pigua, heroes will sigh knowing they are no match against it." (八極參劈掛，神鬼都害怕。劈掛參八極，英雄嘆莫及)
Source: Wikipedia

For more information on this style and its’techniques, see: 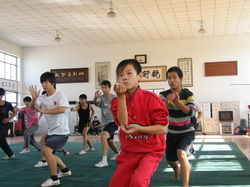 Photo by G. Brundage
I visited this school with my translator during the National Day holiday October, 2011.
This large training center is located in a suburb called "Mengcun," about an hour drive from Cangzhou's central city area. Cangzhou is famous for Kaimen Baji Quan or Eight Extremes Fist - one of the oldest and best known styles of traditional Wushu, founded by Wu Zhong (1712 – 1802). The current school is run by 8th, 9th, and 10th generation descendants of Master Wu. They were very kind, gave us a grand tour, and I even had the opportunity to some light sparring with Wu Sheng Hui (age 19). It was a great time and I can't say enough good things about their kindness and hospitality. 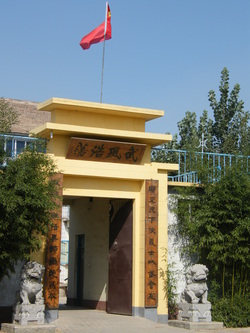 Photo by G. Brundage
During the October 1st National Holiday - 2011 - I also visited this school. They teach some regular academic classes in addition to martial arts. It's very large, well designed and the one older guy that was there that day was very kind and welcoming. The taxi drivers in Cangzhou all know it so you don't need to worry about the address.
http://zhidao.baidu.com/question/225245161.html
Lin Chong Martial Arts School in Cangzhou, Hebei,  Cangzhou City Wing Road
By the two South Street
03172059861
2059869
河北沧州林冲武术学校
地址：河北省沧州市运河区电话：(0317)2059869

Many Cangzhou regular schools have martial arts programs too! 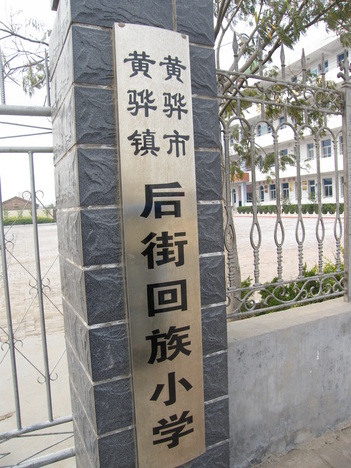 
Cangzhou also has several amazing acrobatic troups with the most famous being:
http://www.zgczzjt.com/ 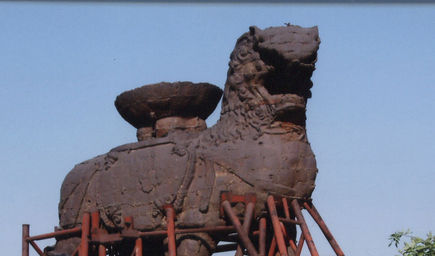 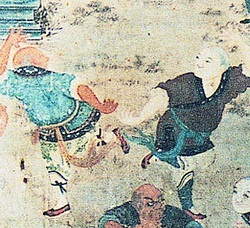 A mural painting in the temple - early 19th century
Dengfeng (Chinese: 登封; pinyin: Dēngfēng is a county-level city in Zhengzhou, Henan province. In ancient times, it was known as Yangcheng (simplified Chinese: 阳城, pinyin: Yángchéng). Dengfeng has an area of 1220 square kilometers and a population of 630,000.

Dengfeng is located at the foot of the Mount Song, one of the most sacred mountains in China. The city is one of the most renowned spiritual centres of China, home to various religious institutions and temples, such as the Taoist Zhongyue Temple, the Buddhist Shaolin Temple, as well as the Confucian Songyang Academy, hence its poetic expression derived from Chinese literature as the spiritual "centre of heaven and earth."

Songshan Shaolin School see:
The Shaolin Monastery or Shaolin Temple (Chinese: 少林寺; pinyin: Shàolín Sì;) is a Chán Buddhist temple at Song
Shan near Zhengzhou City Henan Province in Dengfeng,China. It is led by Venerable abbot Shi Yǒngxìn. Founded in the 5th century, the monastery is long famous for its association with Chinese martial arts and particularly with
Shaolin Kung Fu, and it is the MahayanaBuddhist monastery perhaps best known to the Western world.
http://www.shaolinkungfus.com/

Tagou Martial Arts School was built in 1978 in response to the revival of the popularity of kung fu in China due to the Jet Li film "Shaolin" Temple.

The school is China's largest martial arts school, and was featured in the movie "The Real Shaolin."
http://www.shaolintagou.com/english/home.asp 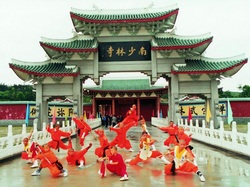 SOUTH SHAOLIN Putian's Lin Quan Yuan
Putian City (Chinese: 莆田; pinyin: Pútián) is a prefecture-level city in eastern Fujian province, People's Republic of China. It borders Fuzhou City to the north, Quanzhou City to the south, and the Taiwan Strait to the east.

South Shaolin
The styles of the South Shaolin lineage have always been esteemed for their focus on simple, effective movements and short range, devastating power. Above all, the tumultuous and bloody history of the region both before and after the legendary burning of the South Shaolin Temple has been critical in shaping southern style martial arts.

In reality, there was actually not one, but three South Shaolin Temples, all located in different areas of Fujian Province:

The oldest was the Putian Temple, established in 557 AD, just 61 years after the mother temple in North China’s Henan Province.

The Quanzhou Temple was established in the 9th century AD, after the Emperor of the Tang Dynasty sent a group of Shaolin monks south to protect the Fujian coast from attacks by pirates.

History is still confused about these three temples. We cannot say for sure whether all three co-existed at the same time, succeeded each other, or even which was the South Shaolin Temple immortalised in martial arts legend.
http://www.kungfu-taichi.com/servlet/kungfoo/Action/Resource/ResourceKey/1961

“Excavations in 1986 unearthed some ancient building remains and pottery shards, along with some stunningly well-preserved stone baths (that were determined to be for medicinal use). They bore the names Lin Quan Yuan (林泉院), Si Shan Jie (寺山界), and most importantly, one of the stone baths was also inscribed with a sentence describing its origin. To Putian, this was clear evidence that their city was home to the fabled Southern Shaolin temple.

"These precious historical artifacts - heralded to be proof of Putian's claim to kungfu greatness - are laid out on the floor or behind poorly secured glass cabinets that line one wall, in an unguarded room with no climate control. Questions put to gift shop employees about other historical evidence was answered with a shake of the head.

"In fact. the archaeological finds do indicate that there was a temple at this location, known as Lin Quan Yuan. Unfortunately for Putian, province-level archaeologists were not convinced that Lin Quan Yuan had any direct links to the Shaolin monks.”
http://www.whatsonxiamen.com/travel_msg.php?titleid=120&travel

Related:
Quanzhou Shaolin Temple
"According to the Qing-era publication, Records of the Western Mountain (西山杂志), the Quanzhou Shaolin Temple was first built in the year 611,
more than 1,300 years ago. None of the original temple stands, as it had been  destroyed and subsequently rebuilt three times. In 907, Wang Shenzhi, a rebel  who created the 'Min Kingdom' during the Five Dynasties and Ten Kingdoms period (and was responsible for trying to eradicate the surname Shen), razed the  temple to the ground as the monks opposed his rule. It was rebuilt during the  Northern Song dynasty. In 1236, it was destroyed again, under orders of the  Southern Song Dynasty government. Its final destruction occurred in 1763. The monks in the temple supported the Qing against the Ming (see above), and  Emperor Qianlong ordered the complete destruction of the temple (and the murder of all who lived there) in vengeance He also forbade the rebuilding of the  temple.

Fuqing's Shaolin Temple
"Most ironically (and perhaps fortunately), it is the most convincing aspirant to the throne of Southern Shaolin that we visited last. The temple in Fuqing is where there are direct historical references to the Shaolin monks. Unlike the temples in Putian and Quanzhou, it is named in 12th, 15th, and 16th century publications and excavations produced Song era pottery with the Chinese characters for Shaofin (少林).
The national Cultural Relics Bureau eventually determined that there had truly been a Shaolin temple in that  location.

"It took me a week get around to make my way back to Songbai bus station in order to catch a bus to Hong Lu (宏路), a small town where we were going to be picked up and driven through the mountains to Fuqing Shaolin Temple. We were a lot more organised this time; I had arranged a driver, a Fuqing native, to show us around (through Mr Fu of Apple Foreign Connections, see our listings for their address and telephone number)."