Recently found an amusing site with European descriptions of Chinese martial arts in the 1800s: http://martialhistory.com/2009/11/chinese-martial-arts-in-19th-century-china/
It's a bit comical but interesting none-the-less. 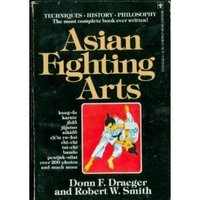 Asian Fighting Arts by Don Draeger & Robert W. Smith
I first read this book back in the 1970s. It is an amazing book. They have a newer edition: "Comprehensive Asian Fighting Arts (Bushido--The Way of the Warrior,"  1981) which might be even better.


Tao of Jeet Kune Do by Bruce Lee (The original publication)

Advanced Tai Chi Chaun II by Dr. Yang Ming-Jwing
A goldmine for the Yang  Style Tai Chi Chaun practioner. Dr. Yang demonstrates how a move from a system can have  multiple potentials. His technique can strike an opponent, down an opponent or  lock an opponent.

Art of War by Sun Tzu

Hagakuri: The book of the Samurai by Yamamoto Tsunetomo

Karate Do Kyan by Funakoshi Ginchin

The  History of Karate by Higaonna

I read somewhere once that after the tragedy of Bruce Lee’s somewhat mysterious death, world martial arts fans needed some comic relief and Jackie Chan’s movies answered that need. His light-hearted, good natured film presence showed the world that martial artists can be funny, lovable people with great skill and deep humanity. Anyone that doesn’t admire  Jackie Chan’s prodigious film career is uninformed. Jackie choreographs his own fight scenes and does his own stunts. He’s a film genius and a physical powerhouse unlike any other. What’s most amazing is that he just keeps getting better. In the most recent film I’ve seen with him about the Shaolin Temple, he managed to add the only light moments and true sparkles of enlightenment to the entire otherwise superficial and rather depressing movie. Jackie Chan comes across as a regular guy who’s happy to be a regular guy, even though he’s definately one of the hardest working and talented actors in film history. 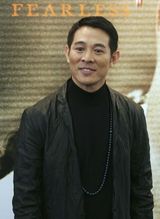 Li Lian Jie is more than an actor or martial artist in my opinion. I think he's helped break down barriers and build bridges between east and west here in China for decades. Though most Westerners extol his American movies as his greatest, I think the “Once Upon A Time In China” series, in which he portrayed folk hero Dr. Wong Fei-hung was his true masterpiece.

The story takes place at the turn of the Century in China and there was a huge amount of justifiable anti-Western feeling floating around. But Wong Fei-hung flew against the wind in his willingness to share medical and other information with the (few) reasonable Westerners around at that time. Of course he fought the devil Westerners, but didn’t allow that to prejudice him. As a martial artist he was peerless, and as a man he was courageous and strong.  I really enjoyed his performance as Sun Wu Kong in the movie Forbidden Kingdom, along with co-star Jackie Chan. Though the movie was obviously aimed at a teenage audience, Li's acting was first rate.

In China his most famous film role may have been his first in the movie Shaolin Si (Temple).

My second favorite Chinese movie with Li was definitely “Fearless”, in which he played Huo Yuanjia, the real-life founder of Chin Woo Athletic Association who soundly  defeated foreign boxers and Japanese martial artists in huge events.

I’d put: “Kiss of the Dragon,” as his second best foreign film because it combined a very realistic plot with great acting and stupendous martial arts. “Romeo Must Die was also good showing the lighter side of his personality and the chemistry with Aliyah worked quite well. “The One” was also interesting because he got to play both the protagonist and antagonist, doing a great job with both.

His 2008 movie “Forbidden City” was an artistic masterpiece suggesting that he’s choosing roles wisely and maturing as an actor.  Though this brief review lists less than half on his film Resume, I have to say Li Lian Lie is the Champion martial arts movie superstar of the last 20 years, though in all honesty it’s hard to compare genres. From a purely theatrical point of view though Jet Li has played a more diverse series of roles during his film career than Jackie Chan. Jet Li has played a role in the ongoing social evolution of China by refraining from prejudices that have plagued many people in all nations. 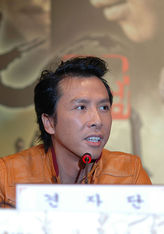 Zhen Zi Dan (called "Danny Yen" in the West) is probably the most popular martial arts movie actor at this time in China. So far he’s racked up an impressive series of more than 50 excellent movies. My favorite was about Ip Man (2008) and Ip Man 2 (2010) about the teacher of Bruce Lee. Zhen also acted in movie 2 of the Once Upon a Time in China series mentioned above. I really liked his “The Legeng Of Chen Zhen” film (also 2010), and many other of his movies. Zhen Zi Dan comes across as more introverted than most actors. I like his quiet, reasonable, calm personality and he seems more thoughtful than most movie actors. Though born in Guangdong he moved to Hong Kong when he was two years old.
http://www.donnieyen.com/ 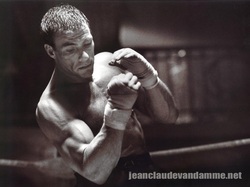 The movie that launched this actor to fame was definitely “Bloodsport” the biography of Frank Dux, winner of the famous “Kumite”in Hong Kong. It was a fantastic movie and a breakthrough piece of cinematography at the time.

He also made several other good movies, like Cyborg (1989), The Quest (1996), Double Impact (humorous - 1991), and Time Cop (1994). His movie “Lionheart” (1990) was good in my opinion too. I like this actor for several reasons including that he was a real fighter and at least early in his career he was a pretty good actor. I don't care much for his nickname: "Muscles from Brussels," because he did have an interesting personality.

Unfortunately his films have gone straight downhill the past many years, and I haven’t seen anything good by him in ten years at least.  But, in his hay-day he was truly great.

Steven Seagal is an American Aikido 7th Dan master that also happens to be an action film star, producer, writer, guitarist and reserve deputy sheriff. He was the first foreigner to open an Aikido Dojo in Japan. His film debut in 1988 titled "Above the Law," was one of the most excellently written movies in martial arts movie history, in my opinion. Someone did a lot of research for movie. Since then he's made many movies and now has a reality show called: Lawman. In addition to all that, he's also an environmentalist and animal rights activist. Though not too popular in China, his Aikido skills are truly extraordinary.

Anyone who saw "Ong Bak - Muay Thai Warrior" knows that Tony Jaa is the real deal: an amazing martial artist and dramatic actor. Though his movie was in Thai language, it was universally loved by every fight fan I know. This guy is amazing. Since then he's made six other movies and he seems to be going strong. To the surprise of many on May 28, 2010 he became a Buddhist monk at a temple in Surin, Thailand. However, those familiar with Thai culture know that this is a very common practice for young men there, in fact is kind of a requirement. They usually don't stay forever. In any case, he's still making movies and stunning the world with his great skill, passion and physicality.

"Fighter in the Wind" is a Korean movie based a true story that in turn is based on the Japanese book "Karate Baka Ichidai." It's the story of a Korean man named Choi Yeung-Eui 최옝의 who went to Japan after World War II to become a pilot. Due to an unfortunate series of events he changes his name to Masutatsu Oyama and winds up wandering the countryside fighting and defeating one master after another. There is an excellent love story too. He was the founder of Kyokushin Karate, the most powerful style of full-contact Karate I have seen. Though the DVD I have is in Korean with no English language subtitles, I still rank this as one of the greatest fighting movies ever made. The story line, acting and fighting scenes are all freaking excellent. I also like really true stories. This is a "must see" movie for all true fight movie fans. I'm a little surprised it's not known outside Korea. (2004)

This review isn't so much about an actor but rather a genre, one that is developing quickly. Most recently I saw the movie "Warrior" in which there were quite a number of excellent MMA champions that added a lot of depth and realism to the fighting. Though I'd personally prefer to have seen a bit more training and a little less drama, the theme of the relationships between warring brothers and a reformed but otherwise pathetic father was well done.

I also really liked "Never Back Down" I and II. Both were excellently done with good mixes of drama and fighting.

Man of Tai Chi with Keanu Reeves and Tiger Chen 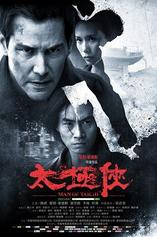 Not high budget, but great action and makes you think a bit. The beginning of a new "Tai Chi" combat genre? Who knows? Anyways, it's entertaining and well done. Tiger Chen doesn't look like a fighter, but man he did a great job in this film. If nothing else, it proves never to judge a book by it's cover. Also, nice to see Keanu back in the mix, and that he picked something interesting to do. Set on location in China too.


If you're curious about Tai Chi combat, check out this video... not related to the movie really, but interesting: http://v.youku.com/v_show/id_XMTA2OTE5MTAw.html

Below are some materials on philosophy, nutrition and exercise... all very useful to martial artists!